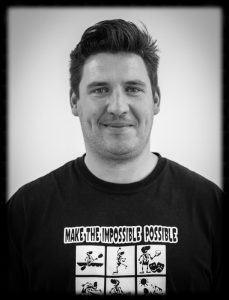 Sven Erić was born 1979. in Zagreb, Croatia. From early adolescence he was curious and versatile. He focused all extra energy on the various physical and sport activities, especially cycling. Love towards riding was transferred to motorcycles, but heavy accident during High school days (1995) marks the rest of his life.

Despite bad diagnosis and future forecasts about his recovery from several heavy injuries, he progressively returns to his daily activities. He finished high school and joined Law school at University of Zagreb. Static theory and lack of creativity in Law studies programme results with quitting Law school. In 2001., on suggestion from nowadays wife, he joined Occupational therapy school on University of Applied Health Studies in Zagreb.

During studying and after earning diploma (2004.) he started to work and live in Germany, for a short spell of time. After returning to Croatia he completed internship in retirement home. Krapinske toplice. At the same time he attended various educational progarmmes for treatment of neurology problems (Bobath, Normal movement) and met Gerlinde Haase, senior Bobath instructor, Feldenkrais® practitioner who introduced him with the method.

In 2007. he started to work in as occupational therapist and he continued to refine knowledge and skills in treating neurological and orthopedic problems. In 2008. he decides to join ARTEM Feldenkrais® teacher training program in Germany under educational director and senior Feldenkrais® trainer Jerry Karzen.

What do i know?

In this dense schedule he finds time for exploring outdoor places, writing motorcycle reviews and meeting his natural curiosity about human development, psychology and movement. Licenced to carry out Awareness through movement® group lessons, and in 2011 he graduated Artem Feldenkrais teacher training and is licenced for Functional integration®  individual instructions.

Practice on your own at home with the help of our audio lessons available on CD!